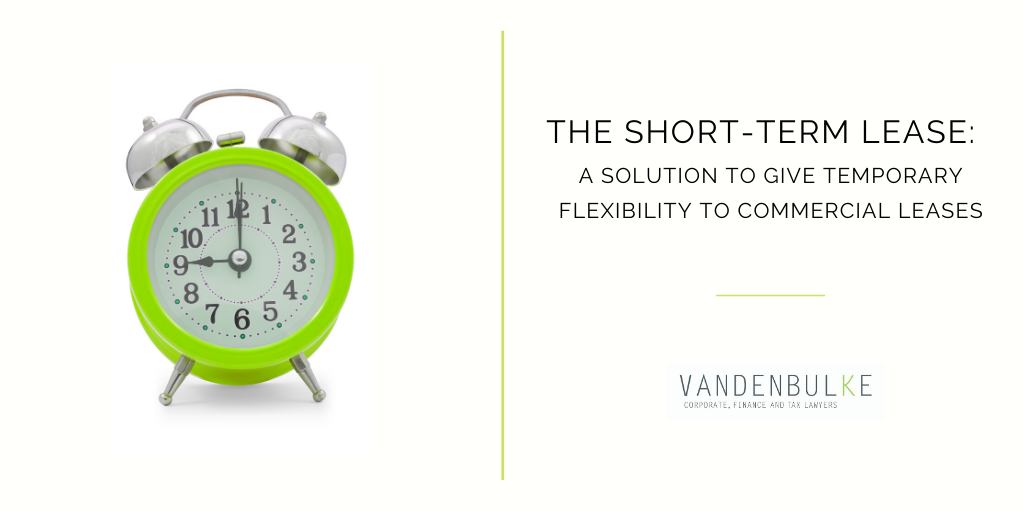 The period of unrest we are currently experiencing has strongly affected contractual relationships and has disrupted the performance of many contracts. Practitioners must be imaginative to find remedies to solve contractual defects.

In this context lessor and tenant often have to find compromises when the tenant could not use the premises being forbidden to run its retail activity because of government constraints while continuing to pay the rent, or although the lease comes to its end the tenant requests an exceptional extension of the lease as he has not been able to organize correctly the transfer of his store to a new location. Lessor and tenant are looking constantly for flexible alternatives to the strict framework of the commercial lease regime.

The first object of the derogation introduced by the Law of 2018 was to protect ephemeral marketing activities (“pop-up stores” or other “concept stores”) and extract them from the strict provisions of the commercial lease regime. However, the short-term lease has many other advantages.

What are the advantages of short-term leases?

Firstly, at the beginning of a relationship it allows the tenant not to commit immediately to a long term, especially for entrepreneurs who start their activity. It can therefore be risky to commit to nine years without having the certainty of successfully launching a business. In addition, the short-term lease will also allow the tenant to “test” his marketing area and leave it quickly if the geographic area does not meet his expectations.

On the lessor’s side, the status of short-term leases will allow for a shorter engagement with a new tenant. The short-term lease will allow him to know more about him before eventually concluding a long-term commercial lease for the future. Then, the lessor will be able to recover the premises at the end of the lease without having to respect any right of renewal or to pay an eviction indemnity to the tenant. Furthermore, in case of future lease the expected rent will not be capped.

The tenant will however have to be wary because the status of short-term leases does not offer him the same protection as the status of long-term commercial leases, in particular with regard to the sustainability of the rental which makes it possible to build up and retain customers.

Indeed, at the end of the short-term lease, the tenant must vacate the premises and cannot claim any eviction indemnity or any right to renew the lease.

The legislator considered that the right to renewal of the lease and the right to eviction compensation are not justified in the case of very short-term leases freely agreed between the parties. This is justified by the precarious nature of the situation, which is generally reflected in the amount of the rent being itself reduced.

The parties must clearly express their intention to derogate from the status of commercial leases. It is advisable to formalize the agreement of the parties in a written contract and to include therein a clause referring specifically to article 1762-4 of the Luxembourg code civil. This contract should contain also the term of the lease, the conditions of an anticipative termination, its potential renewal, and the amount of the rent.

Can a short-term lease be renewed?

The derogatory lease is concluded for a period of less than or equal to one year and ends automatically as of the expiration of the fixed term, without an express termination being necessary.

Contrary to what is provided for by the law on commercial leases, the tenant is not entitled to a tacit renewal of the short-term commercial lease, precisely because of the limited duration of the lease. The parties may nevertheless expressly agree to a renewal of the lease, which will then be renewed under the same rental conditions as the initial lease and without the total duration of the rental being able to exceed one year.

The lease automatically expires as of right one year after the entry into force of the contract, unless the parties have agreed in writing. If the short-term lease is extended by the written agreement of the parties for a period greater than one year, it will be reclassified as a conventional commercial lease, governed by the ad hoc provisions of the Civil Code.

Can a short-term lease be ended before its term?

The parties may  always agree to terminate the lease before its term. Given that the lessee does not benefit from the protection provided for by the long-term commercial lease regime, the short-term lease agreement should allow the lessee to terminate unilaterally,  at any time, the lease with notification, without necessarily given the same right to the lessor.

During the current uncertain period the short-term lease offers a great flexibility to both tenant and lessor who accepts in return to abandon its protective status. This derogatory regime may be used as an interim mechanism for the time needed to get more visibility of the profitability of a new business or as a smooth transition and continuity with a view to a new conventional commercial lease.